The World’s First User Friendly Touch Screen NDI|HX Switcher, go worry free! Everything you need to control your PTZ Cameras and Live Video broadcast via NDI or RTMP/RTSP. Using the 10.1″ HD Touch Screen, you get world class control over your broadcast content. Run your Live Stream or record for future broadcast with this powerful broadcast switcher. A variety of transition special effects, support for multiple transition special effects such as fade in and fade out. Supports custom overlay content; subtitle text and logos.

Run your Live Stream or record for future broadcast with this powerful Switcher. Broadcasts can be sent directly from this device to your CDN via RTMP. The touch screen control makes this the easiest device. Take full control and mix your Audio with the included sliders. Operate your PTZ Camera with the Joystick, Zoom, Focus, and exposure settings. Add and access set points for your cameras. 8 Separate sources are supported with direct access through PGM/PVW control buttons. Add Logo’s and subtitles like a professional into the live broadcast.

NOTE: Pre-orders should be available by the last half of July 2022. You will be charge upon ordering your device.

There are no reviews yet. 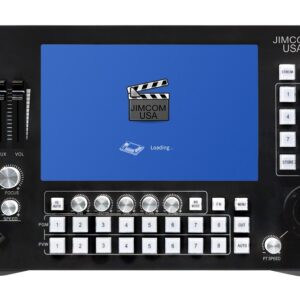